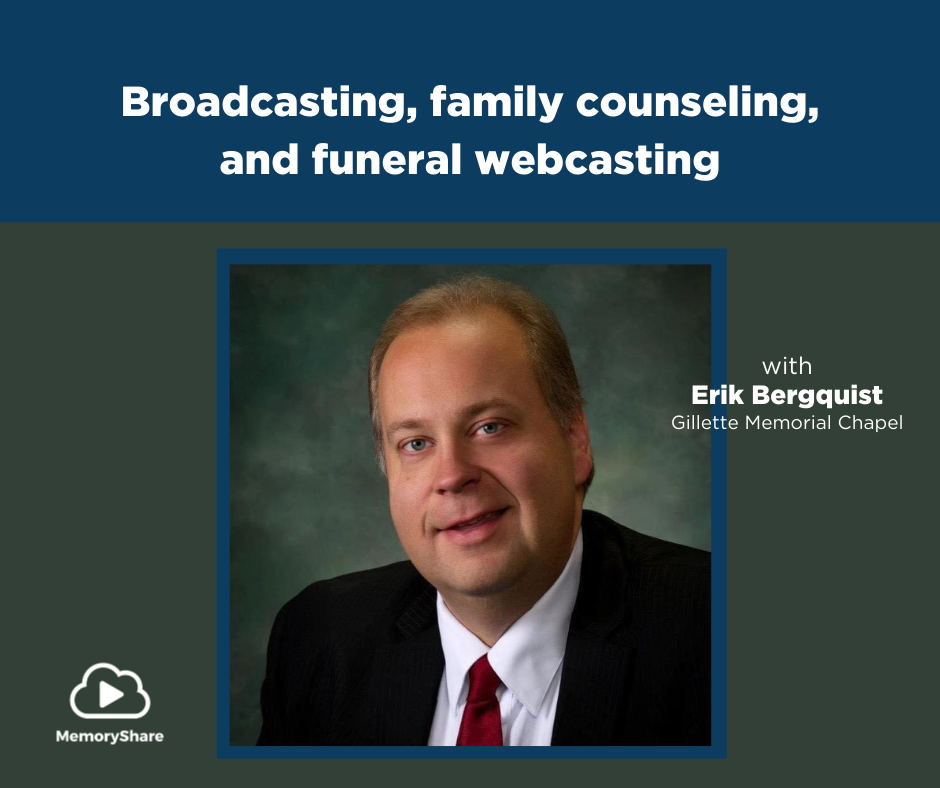 When did you first know you wanted to work in the funeral industry?Many funeral directors have an “a-ha” moment—a moment where something clicks, a realization that this is a profession they want to pursue. However, not everyone has that moment at the start of their career.

For Erik Bergquist, he spent 10 years in another industry that he claims gave him a unique preparation for the funeral industry—radio broadcasting.

“I was the first voice you’d hear in the morning when your alarm went off,” he said. "Good Morning Northeast Wyoming, it is 6:04am and this is the Fox Country Morning Show with Erik B!"

Erik’s a-ha moment for radio was inspired by the legendary Price is Right host, Bob Barker.

“He is my ultimate idol. He knows how to talk to anybody about absolutely anything, and make them feel comfortable in the five minutes on stage with him. My goal as a kid was to take his job.”

One day, that dream nearly came true. When he was 15-years-old, Erik wrote a letter to the show asking questions about being a TV show host. The associate producer at the time called him back, and the two became friends. Over the years Erik was able to interview Bob twice on air. Then in 2003, when they were searching for a new host, the producer brought Erik’s demo to the hiring committee. However, with 15,000 applicants, it wasn’t meant to be.

Instead, years later, another door opened. In addition to radio hosting, Erik was working as an ad representative for Gillette News Record. A woman at Gillette Memorial Chapel & Walker Funeral Home was placing an ad for a new Family Planning Counselor position.

The two were enjoying a conversation when suddenly, a light dawned in the woman’s eyes. “Oh my,” she said, “You’d be so great for this position! You have empathy, and you care about people.”

Erik was flattered and intrigued. She put him in touch with the funeral director at the time. After a conversation and a personality quiz, the director called Erik and asked, “When can I get you on my team?”

In June 2012, Erik had a new addition to his growing list of professional titles — Family Planning Counselor.

“I’ve never looked back,” he said. “I’ve returned to radio a few times, but I never want to leave the funeral industry.”

Erik has had a few “a-ha moments” throughout the years that have deepened his love for the job; like hearing a family say, “I’m really glad we got this done, I feel relieved.” Or the lady who, every year, mails in a CD of new photos of her family saying, “Add these to the plan!”

“Funeral planning is so important, but it’s often hard for people to want to talk about it,” he said. “People are trusting me with these intimate details. That means so much to me.”

The hardest moments are when you know it’s someone’s last days, he said. Mrs. Smith* was an older woman at a hospice house, and Erik had been working with the kids to create the funeral plan. During her final hours, Erik walked through the final questions with her, while the kids gathered around with tears in their eyes. Erik had barely left the building when one of the kids called.

“People trust us, and trust what we do,” he said. “And life is… you just never know what’s going to happen.”

This is another reason why Erik started including funeral livestreaming and funeral webcasting in the planning conversations. You never know what’s going to happen — and that was never made more apparent than in 2020.

“We had already planned on offering livestreaming, but when COVID hit, it catapulted us into it,” he said. “Suddenly we knew, we’ve got to do it now—however we can.”

At first, they tried Facebook streaming and ran into a variety of issues with copyright music, confusion on where to watch the video, even some families streaming from their personal Facebook pages. Then, they learned about MemoryShare.

“Now, people see that we’re professional about it. We can tell them that the video will be live on the obituary page, and within minutes, it’s already ready to go,” Erik said. “MemoryShare continues to implement fail-safe methods. They’ve done a phenomenal job.”

Working in the funeral industry as well as radio broadcasting and newspaper industry has taught Erik that while “new” is sometimes hard, it’s often necessary in order to offer the highest quality service.

“I’ve seen technology change, and I know that bringing a ‘new way of doing this’ can be difficult,” he said. “New things are nerve-wracking and scary in some cases.”

However, with MemoryShare, Erik has seen the entire staff at Gillette Memorial Chapel & Walker Funeral Home adapt to offering livestreaming and bring new value to the families.

“Our group has embraced funeral webcasting, learned it, and are doing a lot of it on their own now,” he said. “They’re seeing the value in it. It’s pretty darn awesome to see it growing.”

For Erik, it comes back to his desire to connect with people; to be that friendly ‘host’ that makes you feel welcome, speaks with empathy, and listens well. This ability is of crucial importance when walking with families through grief, he said. As someone who’s lost both his mother and his brother, Erik has an acute understanding of the importance of grieving and closure.

“Grief is a huge emotion,” he said. “Virtually or in person—you’ve got to be able to have your closure and your grieving.”

This is why Erik believes, pandemic or not, funeral webcasting is here to stay.

“We’ve automatically implemented funeral webcasting into our normal standards. COVID or not, there might be somebody that has died here who’s grandmother is in a nursing home and can’t travel. But with streaming or webcasting, she can attend virtually,” he said. “Funeral streaming is here to stay.”