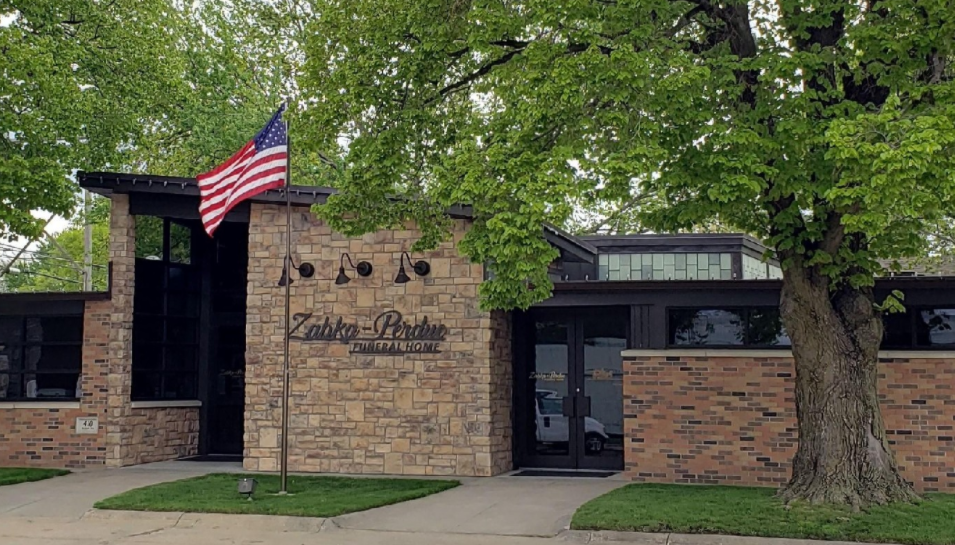 Fear, Funerals, and the Future: Adapting to the funeral industry with Jill Perdue and Zabka-Perdue Funeral Home

When Jill Perdue first stepped behind-the-scenes of the funeral industry, she was terrified. She was newly married to funeral director Brad Perdue, who comes from 8 generations of funeral directors and sparked an interest in the industry at 12-years-old.

Jill, however, couldn’t bear to look at a body.

“When we were first married, we lived above a funeral home in Colorado. I was scared to death,” Jill said (no pun intended). “I would come home and need groceries, but I couldn’t go down the hallway because I had to walk past the bodies under the sheets!”

Now, many years and two kids later, Jill works alongside Brad as co-owners of Zabka-Perdue Funeral Home in Seward, Nebraska. The 145-year-old funeral home has been family-owned since 1874. Brad and Jill are the 8th family owners— and Jill’s come a long way from being too scared to walk by a body.

“I’m now at house removals to help undress and fingernails and all that,” she said.

“I had no idea what goes into planning a funeral... the paperwork, making sure it runs perfect, musicians, etc. You’re planning a major event in 4-5 days,” Jill said. “And every situations is different, because everyone passes away differently, and every family is different.”

As someone who loves to have things scheduled and planned out, this can be difficult for Jill.

“Being a planner does not jive well with this business, because you just never know what’s going to happen,’ she said. “It can be emotionally exhausting—but it’s such a rewarding business.”

“It means a lot to walk through a hard time with a family. We meet so many people, and it’s crazy how many become good friends,” she said. “Hearing people say, ‘I was dreading this process, and you just made it so much easier,’ — that’s what keeps us going.”

Of course, running a funeral home is about both caring for families, and growing a business. Today, Jill, Brad, and the staff at Zabka-Perdue Funeral Home are focused on the future. They know how to connect with families; now how do they stay ahead of the curve when it comes to growing their business?

For Jill, it’s about paying attention to new ideas and trends— and implementing them before the competition.

“When we see new ideas, we try to hop on it, and get those ideas flowing through our funeral home,” Jill said. “You have to keep up with the times and offer new services to make sure people are getting the best innovations and ideas.”

Conventions are one of the top ways Jill and Brad find new ideas for the business, she said. In fact, it was a MemoryShare booth in 2015 that first piqued her interest in funeral livestreaming and webcasting.

“We go to every booth and check out their products. And when I saw the MemoryShare video, that’s what sold us,” she said (you can watch the video here.)

At the time, no other funeral homes that they knew of were livestreaming or recording funerals in Nebraska. Even Brad was hesitant at first. However, when he saw how many views webcasting brought in to the website, he was sold.

“When you see all the views, that’s what sells you on it,” Jill said.

Funeral homes that use MemoryShare see an average of 30 people tuning in to watch the livestreamed services. Often that number reaches over 100, with friends and family watching from around the world. The result is hundreds of website visitors and repeat visitors, boosting web traffic for their funeral home and showcasing what they offer—not to mention an opportunity to say “yes” to families, most of whom now ask for their service to be livestreamed and/or recorded.

Today, Zabka-Perdue Funeral Home records 99% of their funeral services. And it’s not just those who haven’t attended that want to watch it—it’s people who are in attendance as well.

“We had a boy in highschool who had leukemia and passed away his senior year,” Jill shared. “After the service, his family told us, ‘We were numb the day of the service. We don’t really remember that much about the funeral. So we got pizza and rewatched the service as a family.’ That was really neat to hear.”

Even as pandemic restrictions are lifted across the country, Jill and Brad continue to see the need for funeral livestreaming. Family members in the military who can’t attend a service, or weather issues that prevent travel — there are a variety of reasons why someone isn’t able to attend a funeral service in-person. In those moments, Jill and Brad are proud to be known as a funeral home that can say, ‘Yes, we *can* record and livestream your service for you!”

“We said yes to livestreaming, and we’ve never regretted it,” Jill said.

To learn more about MemoryShare and start offering livestreaming at your funeral home, .